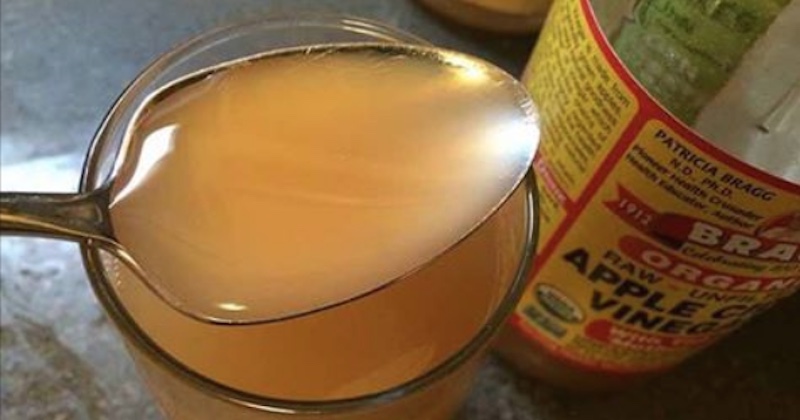 Vinegar is said to have been discovered around 5000 BC, when unattended grape juice turned into wine and then vinegar. Originally used as a food preservative, vinegar’s medicinal uses soon came to light.

Hippocrates used vinegar to manage wounds, while medical practitioners in the 1700s used it to treat everything from poison ivy and croup to stomach aches. Vinegar was even used to treat diabetes.1 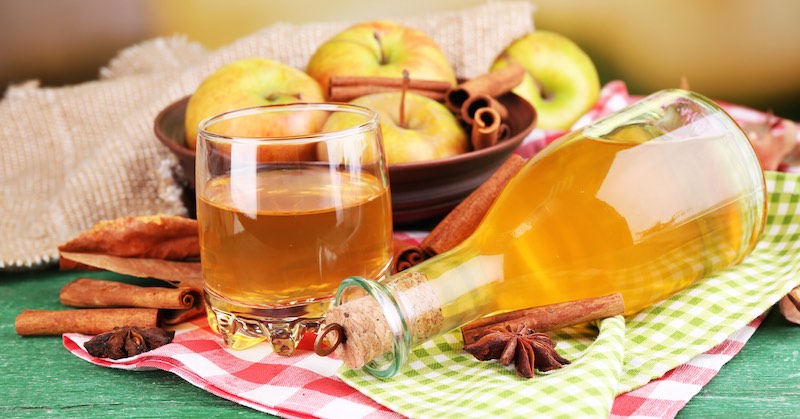 Vinegar, which means “sour wine” in French, can be made from virtually any carbohydrate that can be fermented, including grapes, dates, coconut, potatoes, beets, and, of course, apples.

Traditionally, vinegar is made through a long, slow fermentation process, leaving it rich in bioactive components like acetic acid, gallic acid, catechin, epicatechin, caffeic acid, and more, giving it potent antioxidant, antimicrobial, and many other beneficial properties.

As reported in Medscape General Medicine:2

“The slow methods are generally used for the production of the traditional wine vinegars, and the culture of acetic acid bacteria grows on the surface of the liquid and fermentation proceeds slowly over the course of weeks or months.

The longer fermentation period allows for the accumulation of a non-toxic slime composed of yeast and acetic acid bacteria, known as the mother of vinegar.”

“Mother” of vinegar, a cobweb-like amino acid-based substance found in unprocessed, unfiltered vinegar, indicates your vinegar is of the best quality. Most manufacturers pasteurize and filter their vinegar to prevent the mother from forming, but the “murky” kind is best, especially if you’re planning to consume it.

Vinegar is not only useful for cooking, it’s useful for health purposes, cleaning, garden care, hygiene, and much more. In fact, a jug of vinegar is easily one of the most economical and versatile remedies around. I recommend keeping it in your home at all times.

There are no hard and fast rules concerning taking vinegar internally. Some people take one to two teaspoons a day, mixed in a glass of water, before meals or in the morning, and report benefits from doing so. The risk of taking small amounts of vinegar is low, and research suggests it may have some real health benefits.

Vinegar is said to be anti-glycemic and has a beneficial effect on blood sugar levels. It’s thought that the acetic acid in vinegar may lower blood sugar by preventing the complete digestion of complex carbohydrates, which is accomplished either by accelerating gastric emptying or increasing the uptake of glucose by bodily tissues.3

One theory is that vinegar might inactivate some of the digestive enzymes that break down carbohydrates into sugar, thus slowing the conversion of complex carbohydrate into sugar from a meal into your bloodstream.This gives your body more time to pull sugar out of your blood, preventing your sugar levels from spiking.

Quite a bit of research supports the use of vinegar as a diabetic treatment as well.One study found that vinegar treatment improved insulin sensitivity in 19 percent of individuals with type 2 diabetes and 34 percent of those with pre-diabetes.4  Yet another study found taking two tablespoons of apple cider vinegar before bed lowered blood sugar levels in people with type 2 diabetes by up to 6 percent by the morning.5

“Polyphenols such as chlorogenic acid, which is present in high levels in apple cider vinegar, could inhibit oxidation of LDLs and improve health by preventing cardiovascular diseases.”

One study showed that vinegar could lower cholesterol in laboratory rats,7 while another study on rats found their blood pressure could be lowered by the acetic acid in vinegar.8  Vinegar has also been found to decrease triglyceride levels and VLDL levels (the damaging form of cholesterol) in animal studies.9 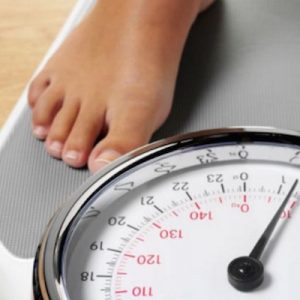 Vinegar may help you lose weight, as it appears to have an anti-obesity effect by increasing satiety and reducing the total amount of food consumed.

For instance, when volunteers consumed a small amount of vinegar along with a high-carb meal (a bagel and juice) they consumed less food for the remainder of the day.

The reduction equated to about 200 to 275 calories a day—an amount that would result in a monthly weight loss of up to 1.5 pounds.10

In addition, separate research found taking vinegar along with bread not only lowered glucose and insulin responses, but also increased levels of satiety. The rating of satiety was directly related to the acetic acid level in the vinegar.11

ACV is one of the best foods to be used during a colon cleanse as it is a great fermentation food that helps to grow the beneficial bacteria in the gut. Find out how you can do a full apple cider vinegar colon cleanse with psyllium husk, for a thorough digestive system cleanse.

Apple cider vinegar helps to break up and reduce mucus in your body, helping to clear your sinuses. It also has antibacterial properties, making it useful to remedy infections.

Apple cider vinegar works for a variety of skin ailments, from bug bites to poison ivy to sunburn. You can either apply it directly to the irritated area or try soaking in a bath with about one cup of vinegar added.

Topical application of apple cider vinegar may help remove warts, likely because of the high levels of acetic acid it contains.12 You can try soaking a cotton ball in vinegar and applying it to the wart, covered, overnight.

Apple cider vinegar contains potassium and enzymes to help banish fatigue. Plus, its amino acids may help prevent the buildup of lactic acid in your body, further preventing fatigue.13

Apple Cider Vinegar Around Your Home

Generally, you can use distilled white vinegar for household use and the cider vinegars, made from fermenting fruits such as apples, for consumption. However, if you prefer you can use apple cider vinegar around your home as well.

Vinegar is one of the best natural cleaning agents there is, and this is largely due to its anti-microbial properties. When added to food, the organic acids in vinegar (especially the acetic acid) pass into cell membranes to kill bacteria.

Foods fermented with vinegar have a natural arsenal of anti-microbial organic acids, including acetic, lactic, ascorbic, citric, malic, propionic, succinic, and tartaric acids. One study found acetic acid to be lethal to even E. coli O157:H7, while other research has shown substances such as acetic acid, lemon juice, or a combination of lemon juice and vinegar to be effective against salmonella.14

Vinegar is very effective to control weeds in your garden. Howard Garrett, also known as “The Dirt Doctor”, shared his recipe for vinegar-based herbicide (this spray will injure any plant it touches, so use it only on those you want to remove):

Apple cider vinegar in a bowl will help to neutralize odors in your home. 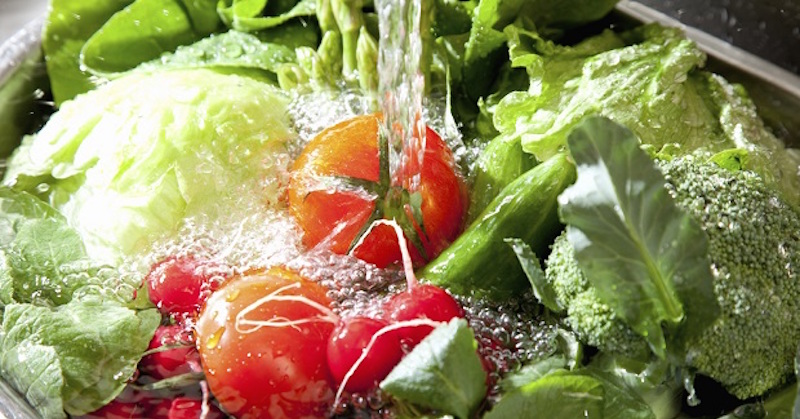 Vinegar is one of the best natural agents for removing certain pesticides and bacteria from your fresh produce. Try a solution of 10 percent vinegar to 90 percent water as a bath to briefly soak produce. Just place your veggies or fruit in the solution, swish them around, and rinse thoroughly (don’t use this process on fragile fruits like berries since they could be damaged in the process or soak up too much vinegar through their porous skins).

Apple cider vinegar helps remove product build-up and balance your scalp’s pH level. Try a weekly rinse of one-third cup of vinegar mixed with four cups of water.  For dandruff, try spraying your scalp with equal parts vinegar and water (mixed), wrapping a towel around your head, and leaving it to sit for an hour. Then, wash out and repeat up to twice a week.15

Diluted apple cider vinegar on a cotton ball makes a simple facial toner and cleanser to help prevent breakouts. It might even help bruises to fade faster.

Apple cider vinegar helps kill odor-causing bacteria, so dab a bit under your arms for a natural deodorant.

Swishing diluted apple cider vinegar can help to eliminate bad breath and whiten teeth. Keep in mind, however, that apple cider vinegar is acidic. The main ingredient is acetic acid, which may be a little harsh on the enamel, so you should always dilute it with water before swallowing.

Wiping your feet down with apple cider vinegar can help to eliminate odor-causing bacteria and smells from your feet.

Apple Cider Vinegar In Your Cooking

There are many creative ways to use apple cider in cooking. Try it in homemade marinades and sauces, soups, or even smoothies. You can even add it to baked goods (it will add extra lift) and, of course, use it in salad dressing (try it mixed with olive oil, garlic, and mustard, for instance).16

Vinegar is good on fish as well and serves as a great tenderizing marinade for meat, giving it a good bit of zing. And it’s tasty drizzled over cooked greens or as a base for a cucumber salad. You can also try your hand at pickled vegetables using vinegar.

Vinegar is also a vital addition to homemade bone broth. When it comes to making broth, the vinegar helps leech all those valuable minerals from the bones into the stockpot water, which is ultimately what you’ll be eating. The goal is to extract as many minerals as possible out of the bones into the broth. 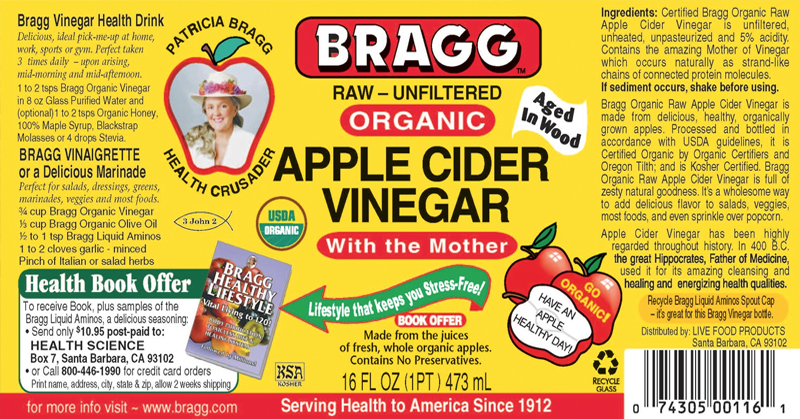 Bragg’s raw apple cider vinegar is a good choice, as it’s unfiltered and unpasteurized. If you’re consuming vinegar for therapeutic reasons but don’t enjoy the flavor, you can alternatively consume other fermented foods to get the beneficial acids. This will then also help to recolonize your gut with beneficial bacteria. However, vinegar is easier and certainly safe to use, so you can certainly include it in your diet if you enjoy it.

Distilled white vinegar is excellent for cleaning and laundry, but for health purposes you’ll want to avoid the perfectly clear, “sparkling clean” varieties you commonly see on grocery store shelves. Instead, you want organic, unfiltered, unprocessed vinegar, which is murky. As mentioned, that murkiness is caused by a cobweb-like substance called the “mother,” and it is indicative of a high-quality product.

Finally, if you are considering taking apple cider vinegar medicinally, long-term excessive use could conceivably cause low potassium levels and can adversely affect your bone density—so moderation is important.

In addition, apple cider vinegar could theoretically interact with diuretics, laxatives, and medicines for diabetes and heart disease. If you are under the care of a physician and you want to try a course of apple cider vinegar, talk to your physician first to make sure it won’t interfere with any of the medications you are currently taking.

This article was originally published on Mercola.com. It is republished here with permission.

Some of the links I post on this site are affiliate links. If you go through them to make a purchase, I will earn a small commission (at no additional cost to you). However, note that I’m recommending these products because of their quality and that I have good experience using them, not because of the commission to be made.